skip to main | skip to sidebar

Birds at My Window 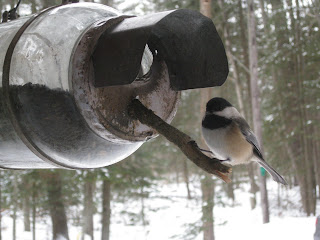 Jack and Joanne Bouck have made a life-long habit of birding. They also have made a lot of birdfeeders from large-sized pickle jars. Maybe they used pickled baloney jars. There is one hanging from the eve of the cabin above the butterfly garden. The jar lid has a hole cut in for the birds to fly inside. There they grab a sunflower seed or two and fly out. It is fascinating to watch.

The hole is large enough for the small birds like chickadees. They fly in one at a time, perch on the handy stick and take a look into the cabin window. Never do they seem frightened and so you get a chance to say hello. Then they sneak into the hole, grab a seed, turnaround and fly out to a tree branch.

I suppose they could get piggy and just stay in there and eat. One would guess that if a grosbeak was small enough to go inside, that is what it would do. The chickadees always seem polite though. Rarely is there a skirmish. They take their turn, grab a snack and return when the air traffic clears.
-Brian Hutchins
Posted by Marguerite Gahagan Nature Preserve at 6:00 AM